Why trees are the solution to palm oil: a documentary

The effects of palm oil on the environment are becoming more visible to the public as general awareness for the climate is rising and the media covers this important topic in greater depth. It’s the solutions to palm oil that pose the biggest puzzle.

Palm oil is the most ubiquitous product in our industry; it’s everywhere - in our food, cosmetics and even in our clothes. Finding alternatives to palm oil is not easy. Four million people in rural Indonesia directly depend on it and an estimated 17 million additional people earn their income from this industry - and that’s not even accounting for Malaysia.

The people affected by the palm oil industry

“I saw my first forest when I was 23”. Nayla Azmi is the Communications Officer at the Orangutan Information Centre (OIC), an NGO collaborating with the Sumatran Orangutan Society (SOS), Ecosia’s tree planting partner in Sumatra. “I was born in a palm oil plantation because back then my parents lived inside of the palm oil plantation”.

25% of Indonesia’s rainforests have been turned into palm oil monocultures. For many generations, including Nayla’s, "forest" equals plantation. “We weren't taught much about the forest in school. Every single thing that I saw all my life was palm oil plantations so it was like - that’s my environment”.

Nayla had no image of what the world outside her small, rural village looked like. Her entire family works in the palm oil industry. “Palm oil is basically the first export commodity from Indonesia. Every single person that I know is involved with the palm oil industry, my family, my friends. I would say that it’s our Indonesian dream.”

“We call it the money tree”, she says. “Because it’s the only crop you can harvest twice in a month and it needs less maintaining, so the more palm oil plantations you have, the more promising a life you will get.”. 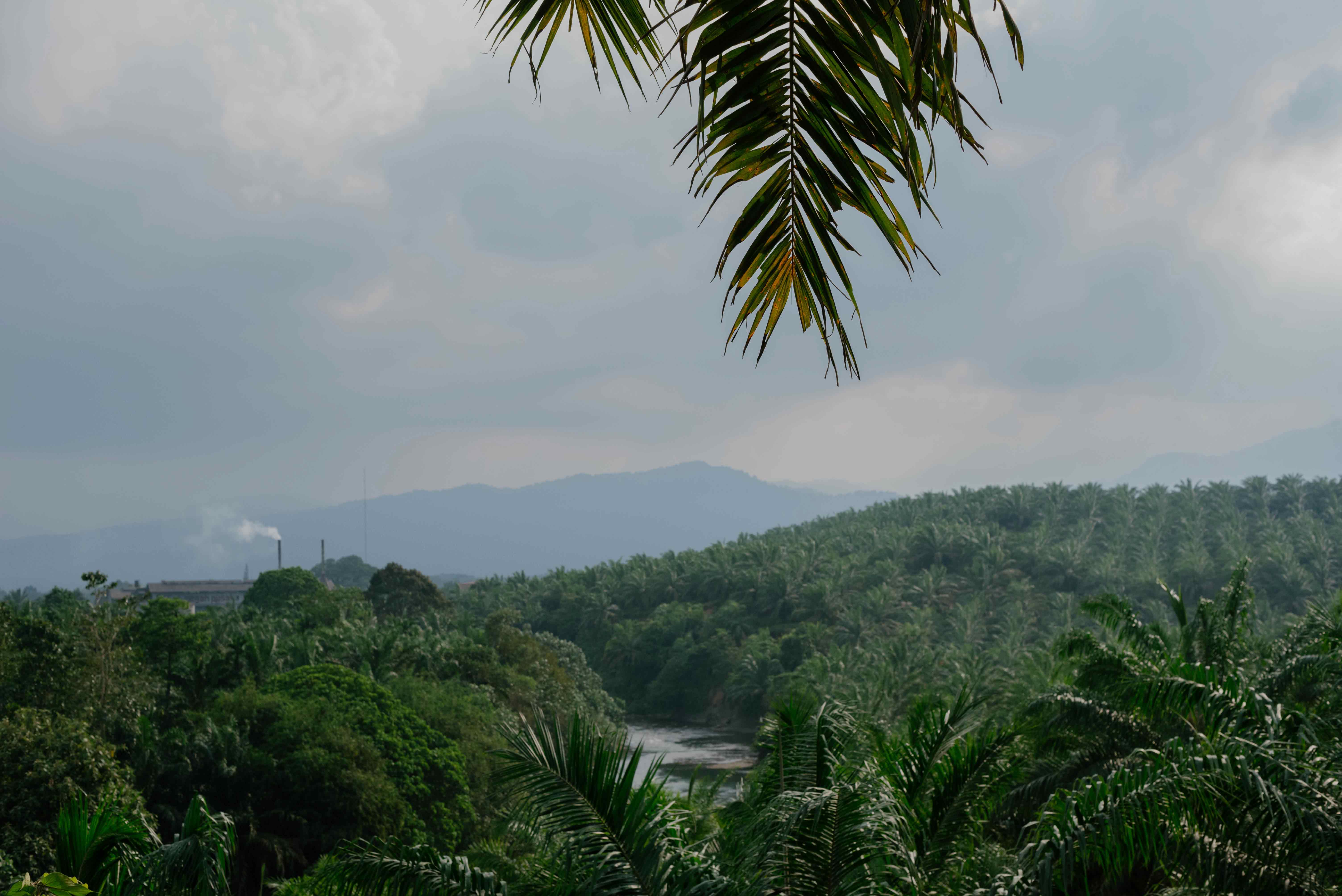 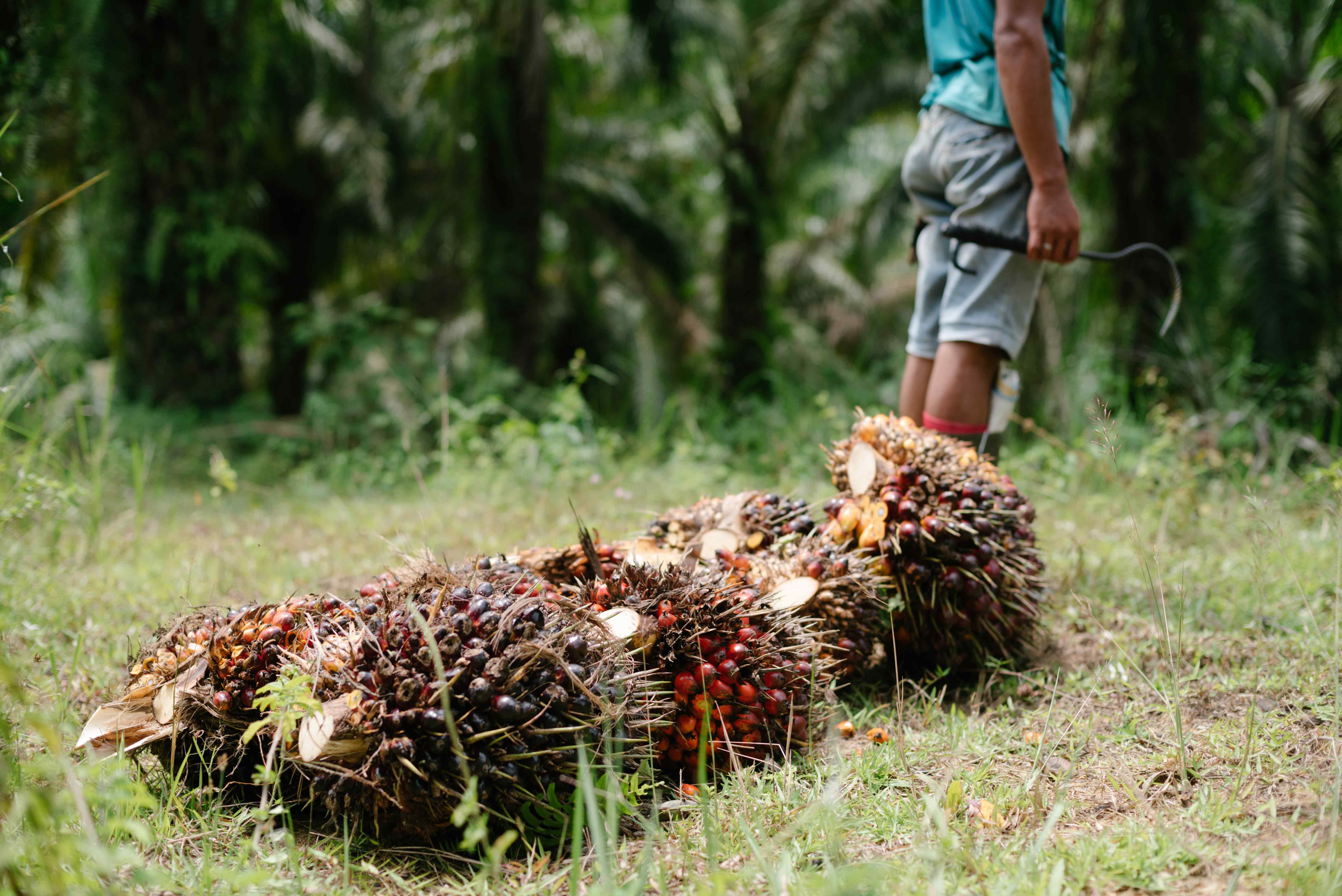 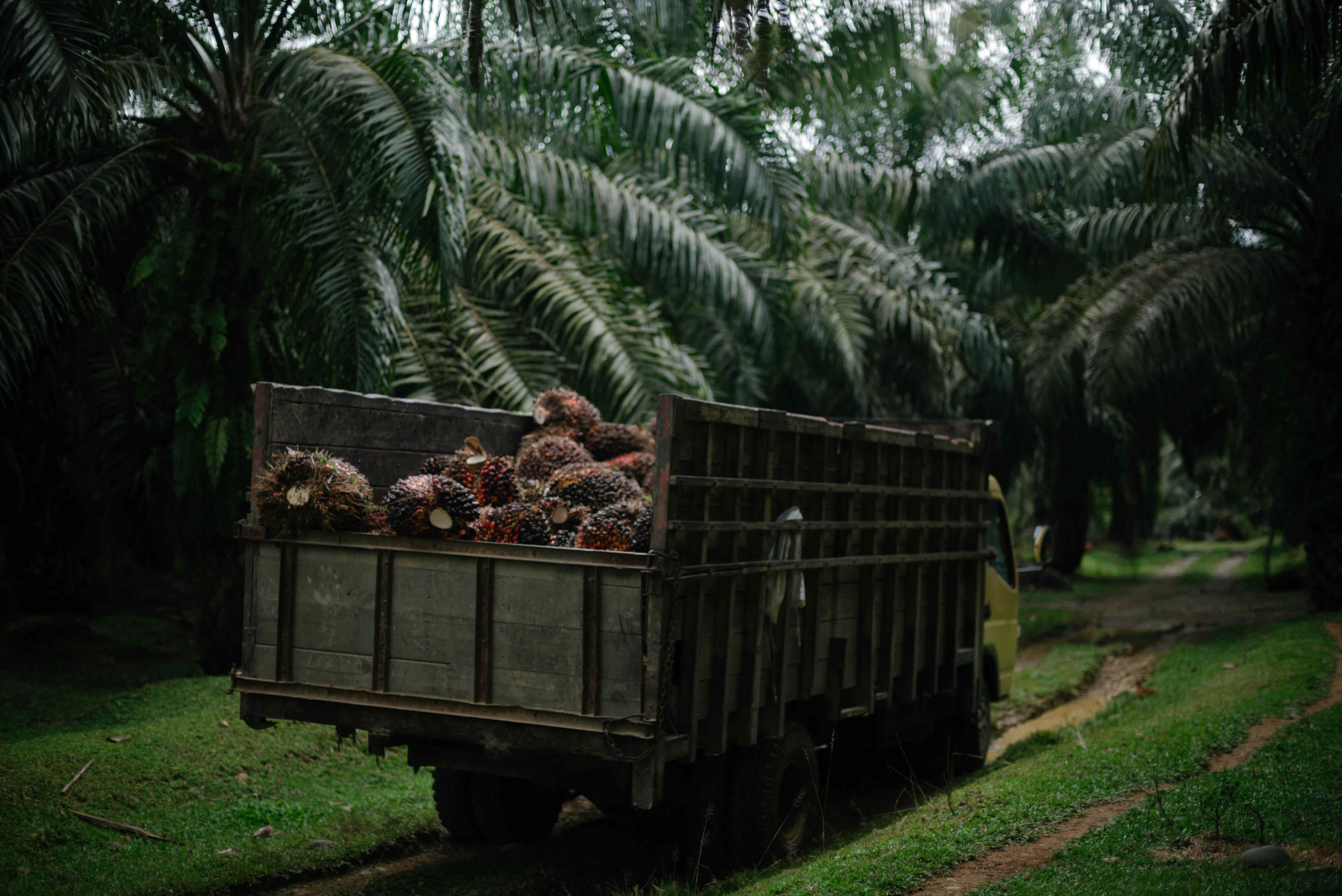 From palm tree monocultures to rows of skyscrapers, Nayla still did not feel completely at ease in Medan. Two years into her studies, she lucked upon one of OIC’s first ever symposiums at her university. In that lecture, she suddenly understood: a real forest looks nothing like her home.

Something inside her lit up.

Curious to see and touch the lush green paradise she had seen on pictures that day, she followed OIC’s development for many years. “I applied as a volunteer but back then they didn’t have any project to accommodate volunteers. I didn't give up and found volunteering opportunities in other conservation NGOs. Then the universe conspired and I met [the founder of OIC] in a youth exchange competition and he offered me a volunteer position in 2013”.

Fast forward to the end of her studies, Nayla rejected a prestigious PhD position at her university and decided to dedicate herself to protecting Sumatra’s few remaining rainforests, instead.

Perhaps the key moment, the one that would dissipate all her doubts about her choice, was the day she went on her first rescue mission with OIC. “I met this orangutan standing under the sun, in glory, beautiful color... and I knew that I had to try my best to protect this majestic creature.” 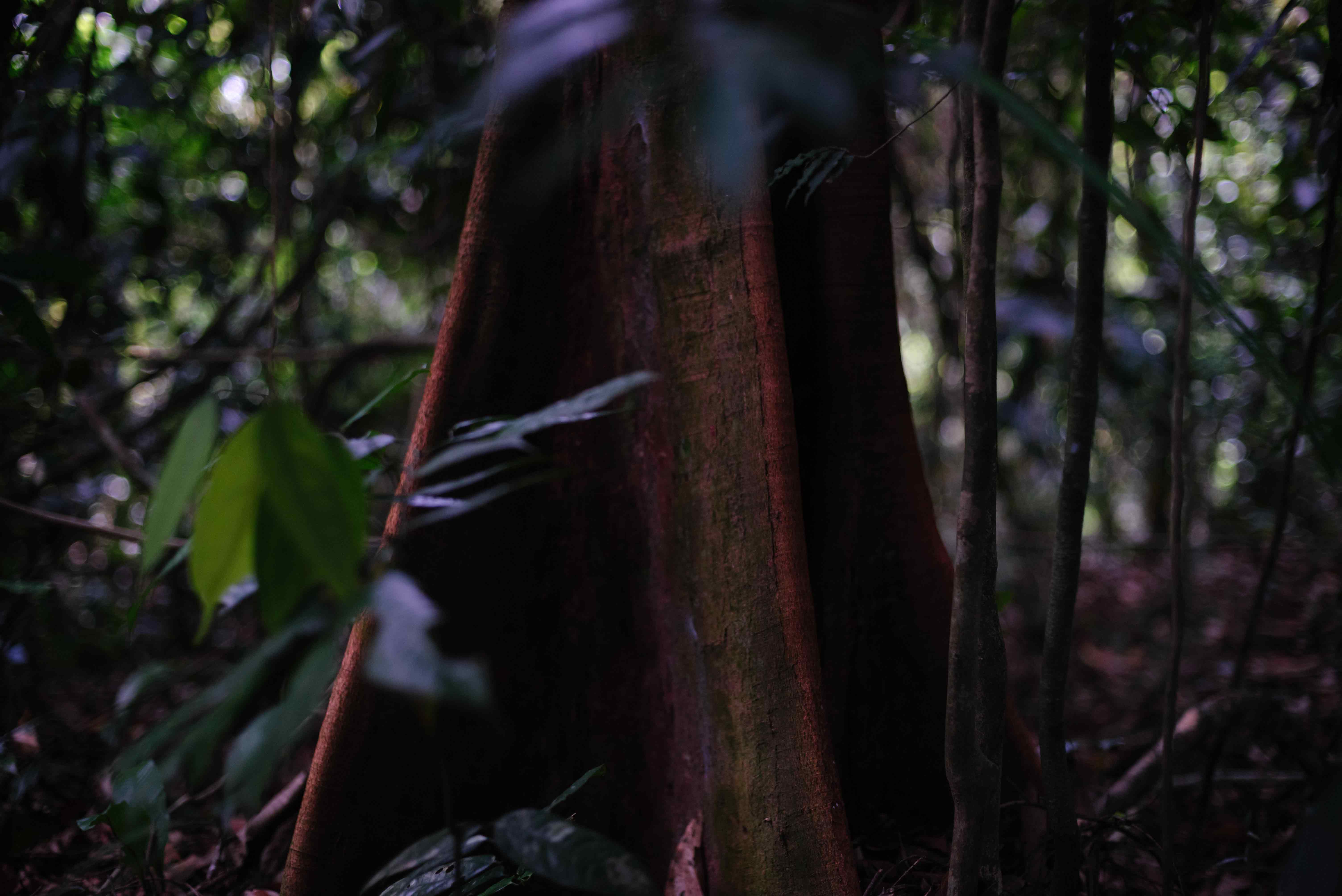 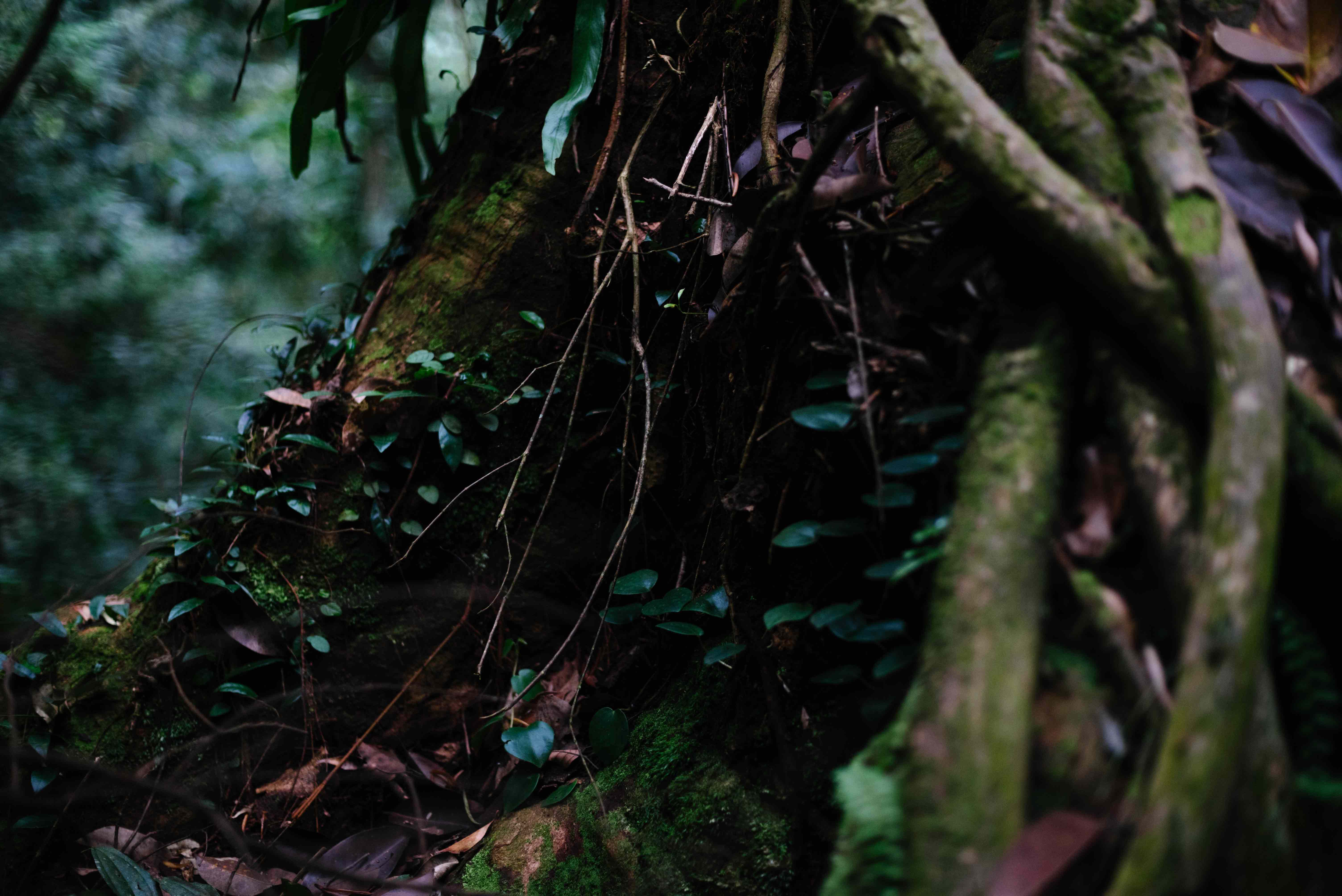 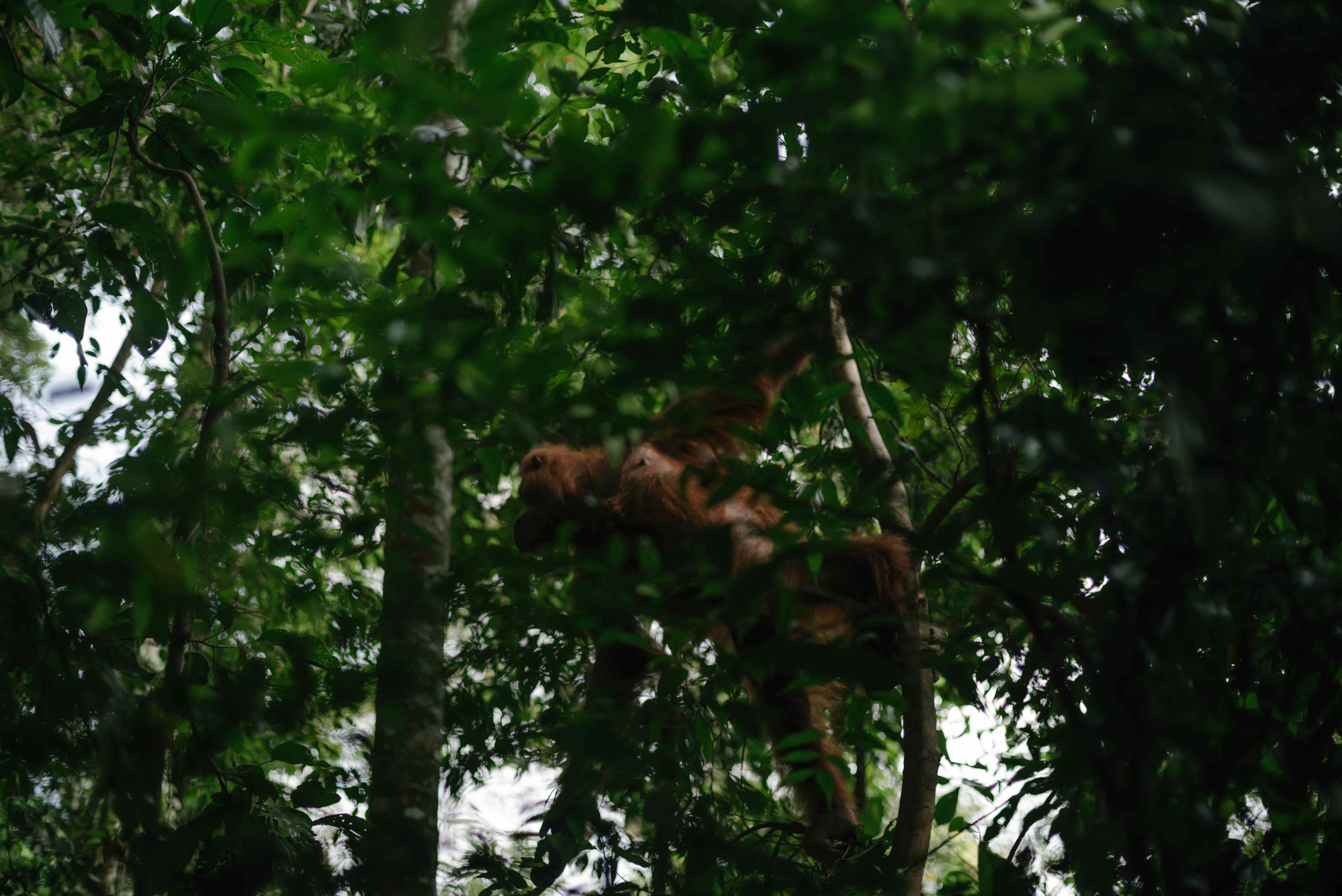 Despite the difficulties Nayla faces as a woman in the male-dominated world of conservation in Indonesia, she never backed down. “I’m happy, this is the fullest life I have ever had, I do not regret my decision at all”, Nayla told us.

It’s the rescue activities that her male colleagues doubt she can handle. “They don’t think I’m strong enough to cope with what we see”, Nayla says. These are similar patterns we have seen at Ecosia in other communities around the world, where women are often undermined despite their key role in making conservation projects complete, or indeed possible at all.

As Communications Manager, Nayla accompanies the rescue team to document the process. “I need to act like a dude, like just another friend so they will accept me”, she repeats often. Indeed, her already hearty laugh becomes louder, her gestures more exaggerated, bridging a gender gap that makes her male colleagues feel more comfortable around a woman in their work life.

A posture exhausting at times but “key to be fully accepted”. It is easier than it was during the first years, she assures me, well aware and vocal of these dynamics. "But sometimes they pamper me too, they can't help themselves", she says laughing. 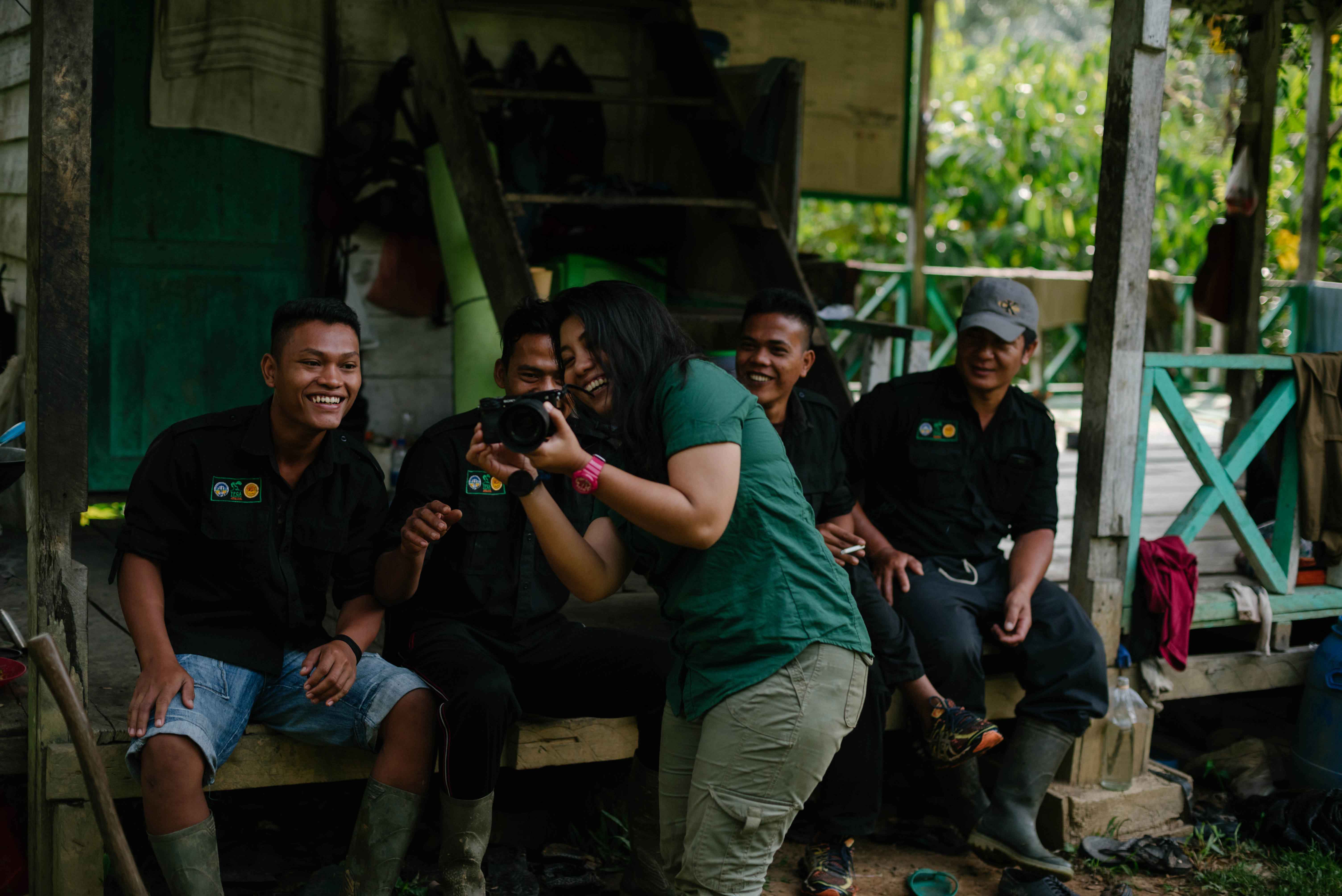 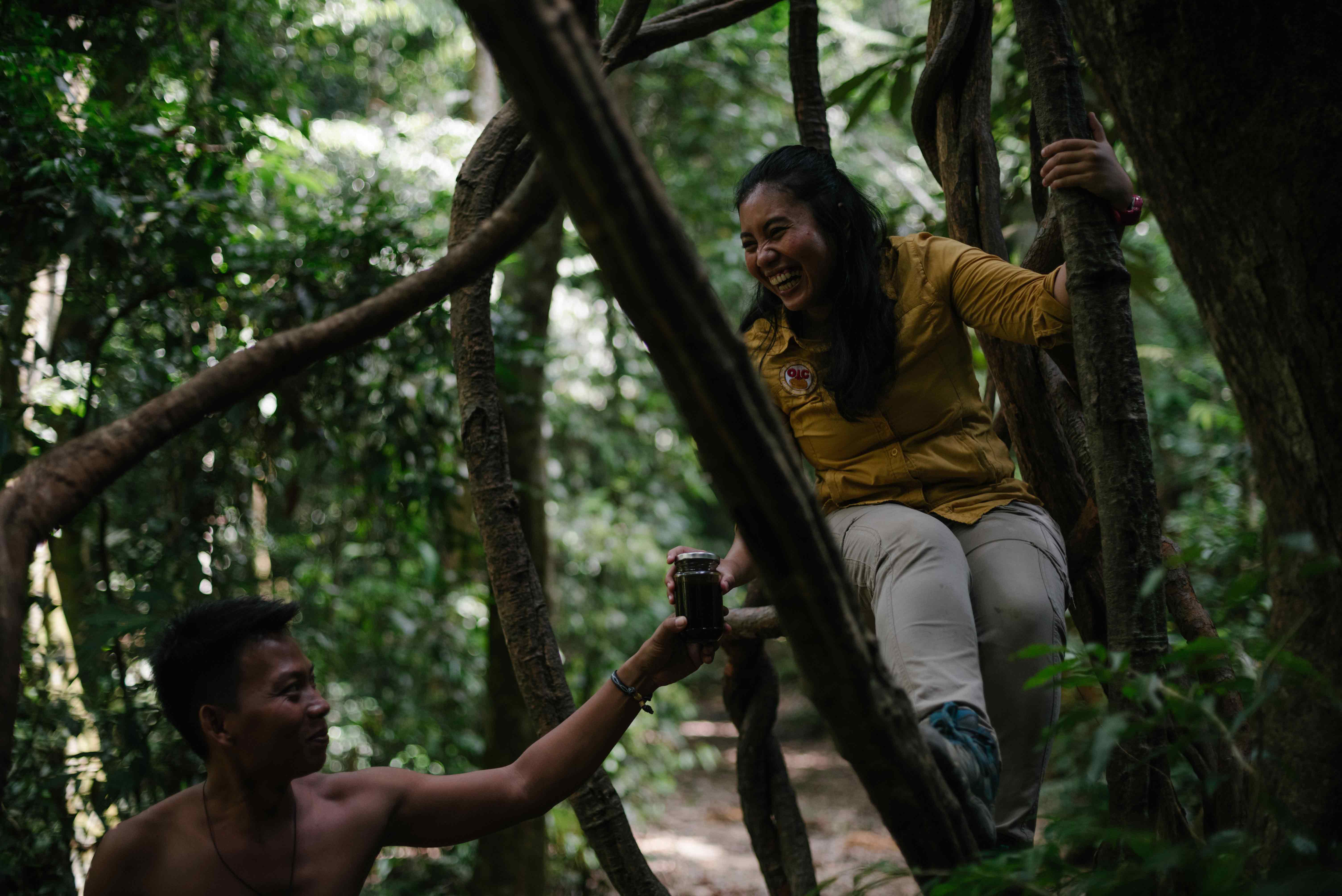 Nayla has to fight off family pressures, too. The palm oil industry is her family’s natural habitat, she sometimes jokes. Having their oldest daughter actively fighting to dismantle the industry in its current form, is not easy to swallow.

“But the thing is people lost their connection [to the forest], we lost our connections and it is very terrifying, that’s why I have to be here to try and find a way back to my forgotten home”. Her family, she says, would surely understand her motives if they too saw how an actual forest feels and looks like.

“People here only understand something if you show them”. It will take time to get everyone on board and, most importantly, there will need to be viable economic alternatives for the people who currently depend on palm oil tapping, like Nayla’s family.

“We have to find solutions and the solution is to put pressure on all of the companies to have a strong willingness to support conservation by making their plantations become sustainable.”, Nayla says.

Boycotting alone will not do the trick, that she is certain of. Instead, “we need to encourage people to start to find alternatives. It’s our responsibility together to think about the alternative to palm oil for the future.”

That’s why at Ecosia we are reforesting former palm oil plantations in Sumatra with the money generated from your internet searches. In Borneo, Ecosia is also helping create alternative income solutions to palm oil.

Providing farmers with an alternative source of income, like the tenkawang nut, for example, helps both them and nature. The tree species that bare this nut thrive only in diverse forests, deterring any incentive to grow monocultures of it.

Additionally, the nut of these trees is very nutritious, which locals can use for cooking. Known as the “green butter” because of its oil, the tenkawang nut can equally be used in cosmetics or biofuel, making palm oil redundant.

Unfortunately, these trees are less efficient than palm oil-producing trees. Yet they are undoubtedly one part of the solution to move away from a single source of industrual oil that is endangering Indonesia’s rainforests and wildlife. 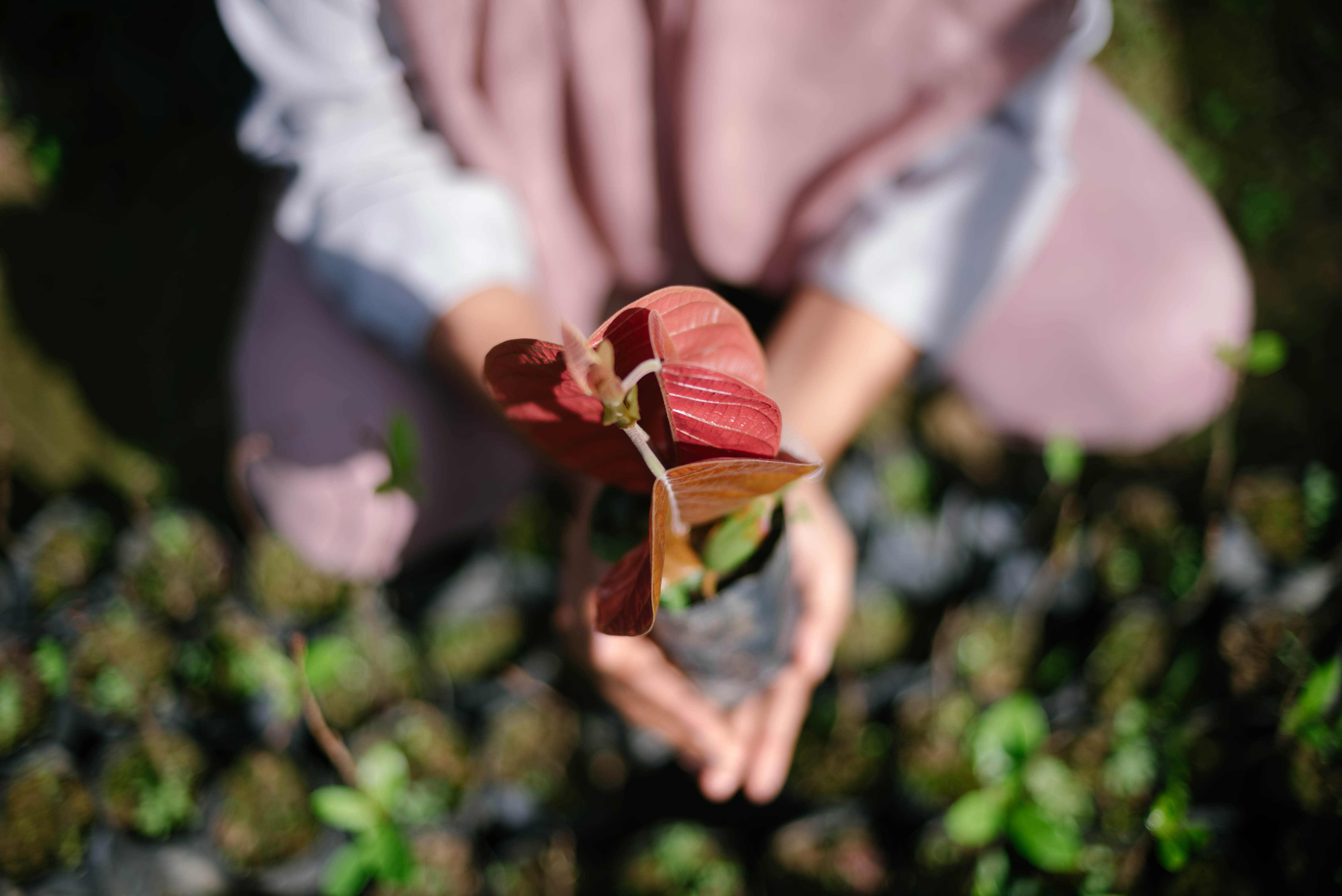 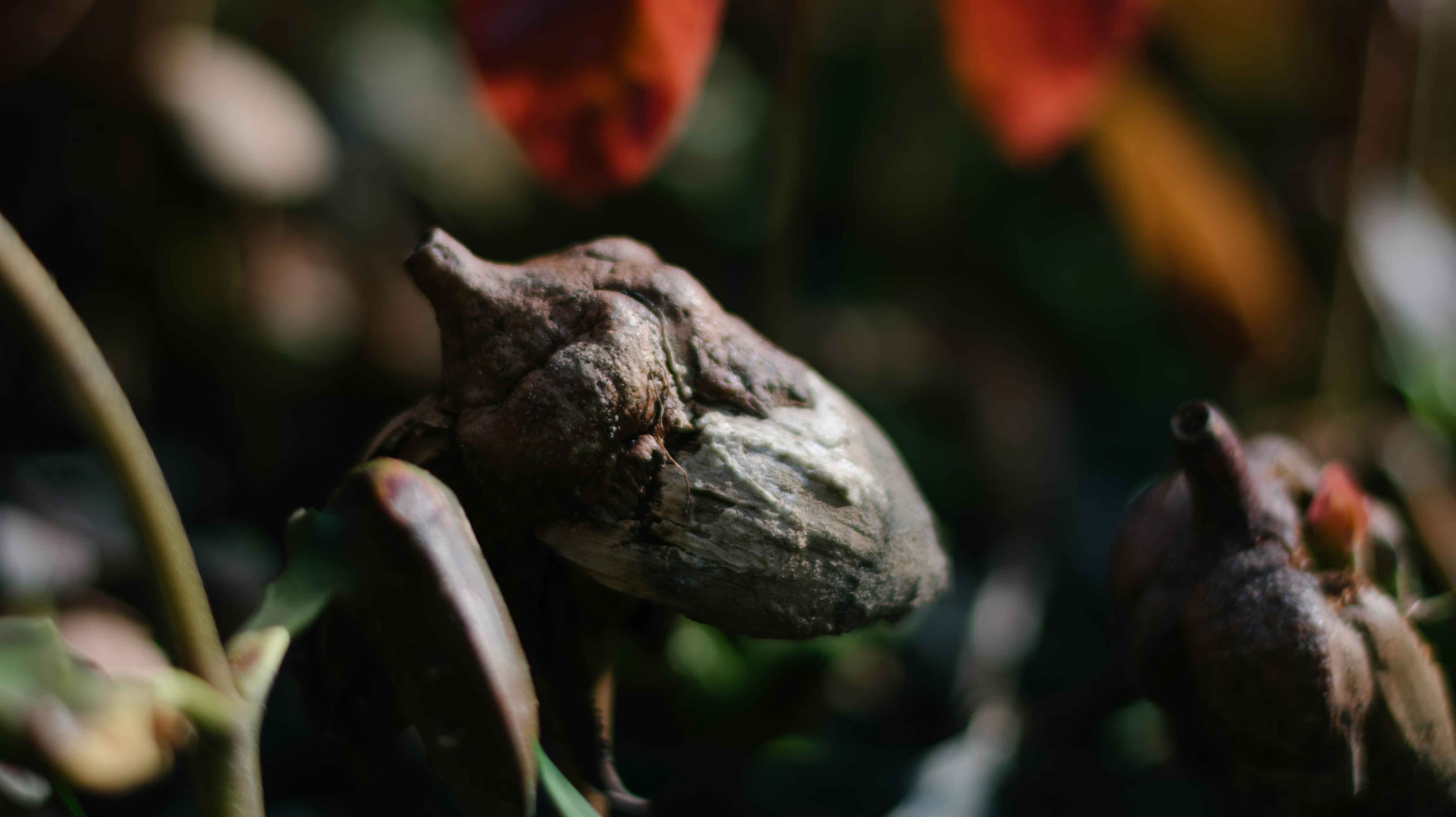 The tenkawang tree and its nut: a solution to palm oil?

“Everybody can take their part in supporting conservation, you can even use your fingers to use Ecosia, you don't know what a difference it makes under the right hands.”, says Nayla.

We need your help to reforest Indonesia and protect its remaining patches of rainforest, which are home to the endangered sumatran and bornean orangutan.

If you haven't already, install the Ecosia extension and download our app!