European elections: why they’re important for the climate

Whether the European Union continues pushing for a strong environmental policy depends on how the new Parliament is set up. If you haven't decided your vote yet, you can take this test. Share it with you friends and inspire them to go vote in the European elections too!

The climate crisis is the biggest challenge of our time and must be a top political priority worldwide. According to the United Nations we have about 12 years to avoid a climatic disaster that will put an end to life on earth as we know it.

To prevent a climate collapse of disastrous proportions, we need to take radical measures and comply with the 1.5°C target set by the UN’s IPCC report.

From Ecosia's point of view, a climate-friendly political set-up is crucial for the world to maintain a sustained and ambitious path towards solving the world's climate crisis.

Climate action can either become a key driver of a renewed European project that puts innovation, (climate) justice and protection at the top of its agenda; or, with a European Parliament set up of climate-denying political parties, it could choose the path of isolation and environmental decline.

It all depends on your vote:

The 3 climate priorities for Europe in the next decade

These elections are crucial for the environment because the new European Parliament will have to decide on three main issues. Without climate-friendly and ambitious members of parliament (MEPs), we are unlikely to make any progress in these areas.

These are the three main changes in policy and direction we strongly believe the ingoing European Parliament and Commission should fight for:

Our agriculture is broken and, sadly, the European Common Agricultural Policy (also known as CAP) is a big part of the problem.

The CAP is a system of subsidies for EU farmers. Around 40% of the European Union’s budget - that is, all the money member states contribute to finance EU-wide projects and policies - goes directly to the CAP.

Created after the second world war, the goal behind CAP was to help a devastated Europe feed itself. With time, though, this policy has created big imbalances. How so? For a deeper dive into how the CAP works, have a look at Wikipedia’s quite complete article on the subject.

To put it simply, the CAP is split into two pillars:

Pillar 1 - drawn directly from the common EU budget - includes direct payments for farmers and general support for the agrarian market. While pillar 2 - mainly financed by the member states themselves - includes subsidies for landscape restoration programs, tourism promotion or ecological farming.

The EU agricultural budget is first distributed among all member states based on a proportional calculation. In a next step, these subsidies available to the member states go to the companies applying for it. The amount of money each company gets is calculated mainly - and this is the big problem - according to the area of operation and its production capacity.

This system has led to an overproduction of food that the European market can’t even consume and it has also put substantial pressure on our soils and wildlife.

80% of the total funds end up in the hands of only 20% of farms, predominantly big corporations. Or the other way around: 80% of companies have to survive on only 20% of the available budget. A budget that is indirectly benefiting damaging agricultural practices over ecological, regenerative ones. 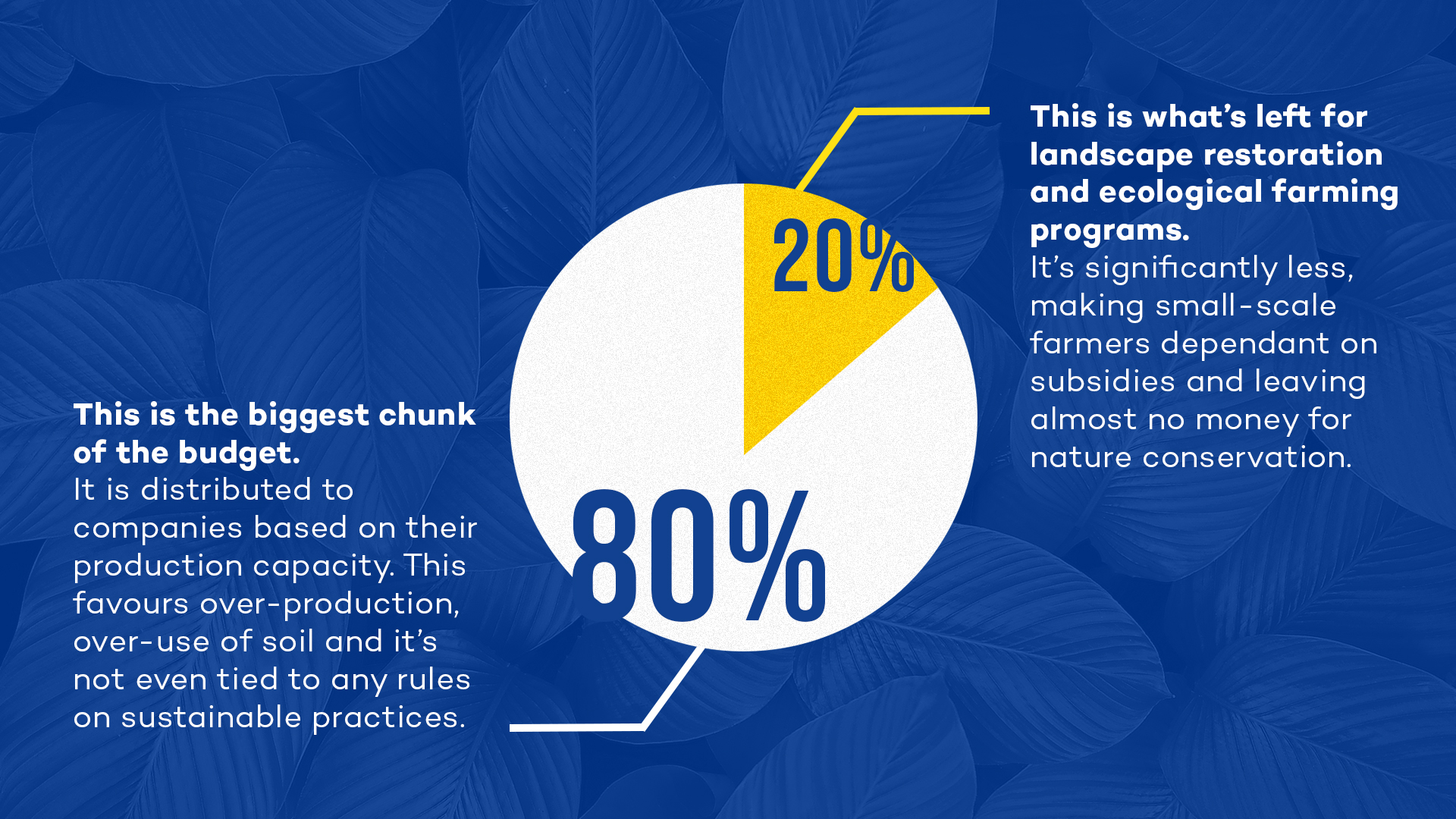 The current rules of the Common Agricultural Policy favour over-production and soil-depleting practices.

What needs to change

The design of the next funding period for the CAP from 2021 to 2027 is currently being negotiated and will have to be approved by the outcoming European Parliament and Commission of these elections.

Many NGOs, organizations and even many MEPs have called for the new CAP to undo these imbalances by decoupling payments from production goals and prioritising small-scale, ecological farming methods, instead.

The IPCC and the IPBES reports by the United Nations leave no room for discussion: if we want our planet to continue supporting human and non-human life, we cannot allow worldwide temperatures to rise above 1.5°C.

To achieve this, Europe needs to phase out fossil fuels completely and drastically reduce its CO2 emissions.

While the European Union has committed to a binding target of cutting emissions by at least 40% by the next decade, this is not enough. The EU has to reach net-zero emissions. In other words, the amount of carbon dioxide released on an annual basis needs to be zero, or even negative.

Whether the European Union will actually pursue such drastic climate goals depends heavily on a European Parliament that accepts no legislation of the European Commission that fails to meet carbon neutral standards (see here how the EU creates legislation). 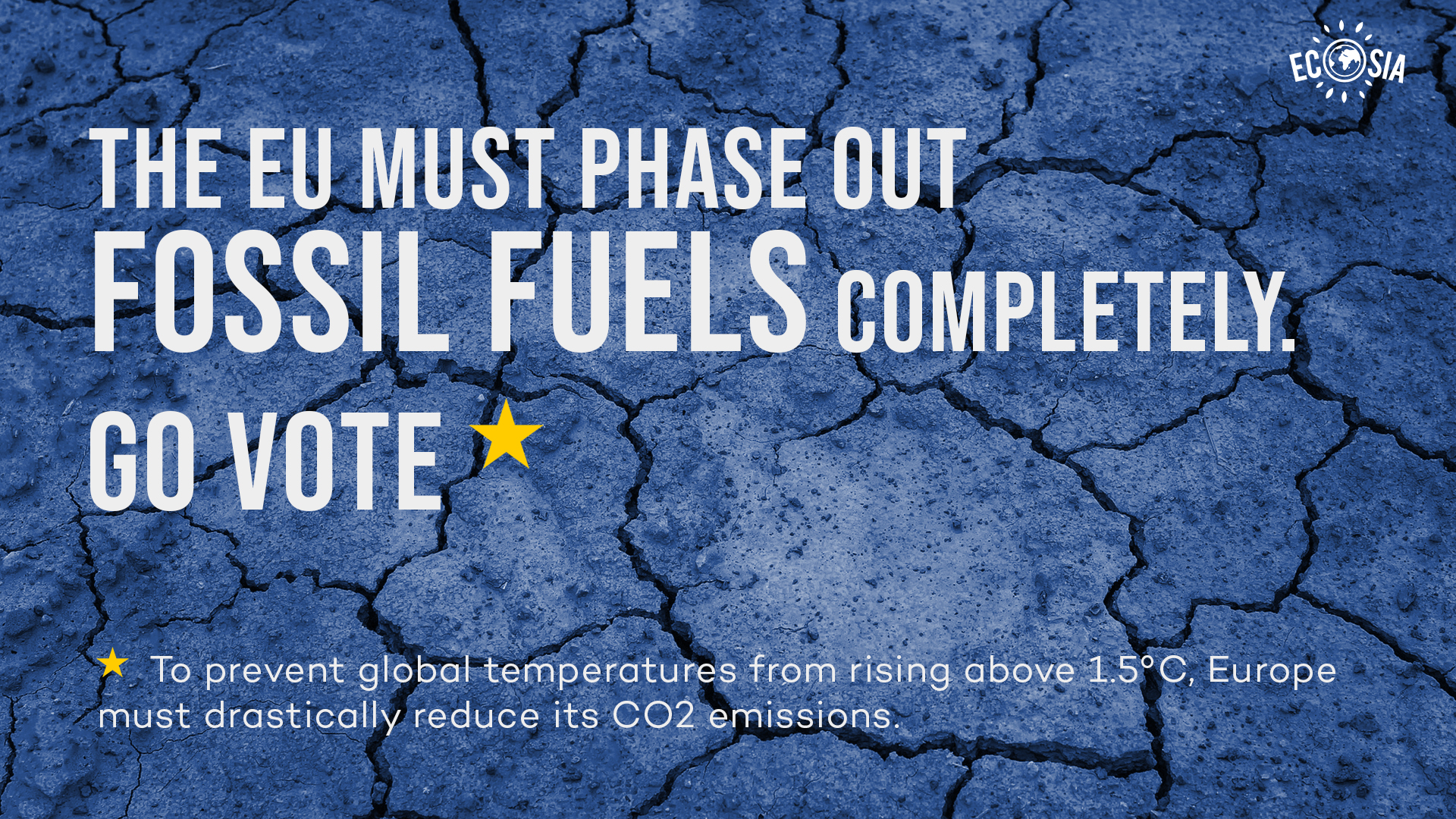 The European Union has a vast, complex set of policies and mechanisms aimed at both regulating CO2 emissions and supporting the development of renewable energies.

The biggest mechanism that tried to regulate Europe-wide CO2 emissions is the European Union Emissions Trading System (EU ETS); an emissions trading scheme which, unfortunately, was not very effective.

For this reason, many experts and environmental groups are calling for a carbon tax that would directly price the true cost of products that have an impact on the climate.

If set at the right level, a carbon tax could be a key instrument for reducing emissions, as it would create incentives for any industry to produce in the least polluting way possible. The money collected through this tax could feed right into a more ambitious, European-wide effort to switch to renewable energies or to build a Europe-wide railway.

The main problem: to get a carbon tax approved involves the member states directly. Tax policy is not an area where the European Parliament can make any decisions on its own - it’s not, as the EU-jargon goes, a “European competence”.

So, when it comes to this topic, see what the top candidate for the EU election of whichever party you’ll be voting for thinks of the carbon tax. Do they agree with the carbon tax? Most importantly: does your national minister of foreign affairs or the one for environmental affairs agree with this policy?

In the end, the member states will be the ones deciding upon this, regardless of the position of the European Parliament. Why should you vote in the European elections?

As the third largest CO2 emitter worldwide, the EU has a special responsibility in the fight against the climate crisis.

Climate change impacts all areas of society - it affects our economy, migration and even our health. Because the climate knows no borders, climate action is most effective at a transnational level.

How do European elections work?

Historically, the European Parliament has taken a strong position when it comes to climate and environmental policy. Yet the upcoming European elections could change that.

When it comes to the European Union, media coverage tends to focus on 'hot topics’. The vote against single-use plastic ban by the European Parliament, for example, was much spoken about. 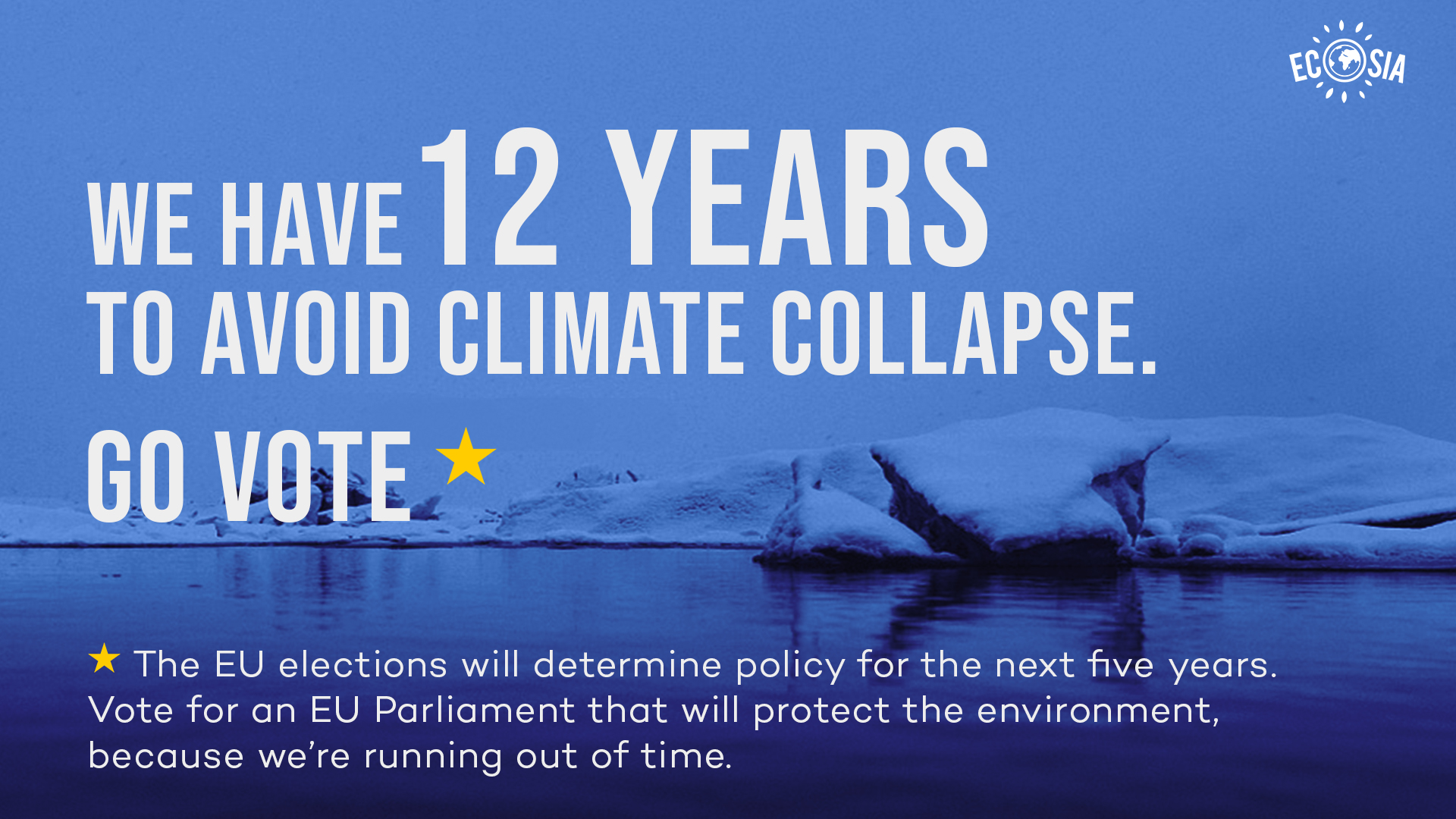 Nevertheless, over the last decades the EU has pushed an important body of environmental legislation which is not always visible to the public. This includes regulations on genetically modified crops, limitations in the use of dangerous chemicals in cleaning products and many other less sexy topics, like the ban on lead being pumped into the air.

These policies have generally been pushed forward by a stable European Parliament traditionally built by two blocks: the center-right European People’s Party (EPP) group and the center-left Progressive Alliance of Socialists and Democrats (S&D).

It’s also these two groups that made a united call for the European Union to transition into a carbon-neutral economy by 2050. According to many projections, though, these two blocs will lose significant power, building a scattered Parliament across the entire political (and environmental) spectrum.

The climate crisis is serious. Trees are nature’s home-made remedy to absorb carbon from the air. Help us plant more of them, if you haven’t done so yet, get the Ecosia app today and start planting trees.

Our project in Senegal

We never have to choose between forests and fields. When trees and agriculture coexist, people thrive.