How we plant trees in Burkina Faso, rain or shine

Your searches on Ecosia are bringing rainfall, lakes and rivers back to Burkina Faso in western Africa. The tree-planting program that we are financing thanks to you will empower local communities to reforest areas of the Sahel and the central plateau (CP) that will help provoke more rainfalls.

As characterized by the red shade on the map, the region of the Sahel is known for its drought-ridden climate, whereas the central plateau, marked in blue, is of greater humidity.

Because of its geographical location, Burkina Faso is mainly characterized by Western African weather conditions. That is a primarily tropical climate with two very distinct seasons: a dry season and one rainy season. 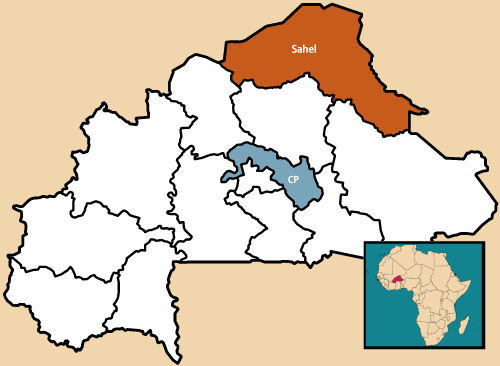 During the dry season the so-called ‘Harmattan’ wind blows which is particularly dry and dust-laden. In the second rainy season the average rainfall is 400 to 900 millimeters. Burkina Faso receives almost 90% of its rain between June and September.

Only one growing season exists, which leaves farmers with a very small time window for the collection of crops and forest goods.

Rain seasons, thus, define communities’ sowing and farming activities. But years of deforestation, climate change and degraded soils have significantly changed local weather conditions. Particularly in the Sahel, rainfall has decreased and become very unpredictable and can sometimes be limited to a few, sudden, cloudbursts.

These changing rain patterns have contributed significantly to the impoverishment of the country:

Random rainfalls often come with a sudden force and big volumes of water, causing floods and destroying crops all at once.

The combination of higher temperatures (due to deforestation and other causes of climate change) and changing rain patterns has als contributed to the evaporation of lakes and rivers.

This, in turn, has further degraded the country’s soils. With too little trees growing in the area that would provide roots to hold the ground together, strong rainfall simply washes the soils away and leads to their further degradation.

That is why the development of soil and water retention techniques is of vital importance. Our tree-planting partners are helping the communities dig half-moon shaped pits on the ground that hold moisture more efficiently, making sure that every so rare rainfall is exploited to the fullest.

With a more efficient water retention technique, more crops and trees can be grown. Ultimately, trees will bring animal life back to the area, help cool the climate by capturing CO2 and, in the long run, cause more rainfalls through compounds released by the leaves.

In short: planting trees actually has the potential to change the world. You are contributing to this simply by entering your searches on Ecosia.